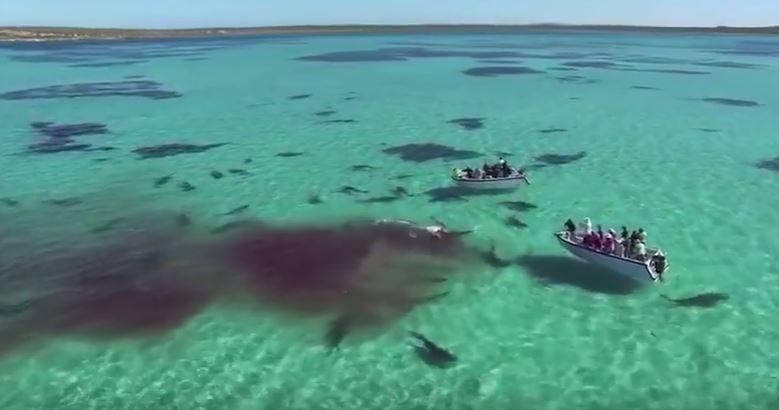 SYDNEY - A drone has captured a bloody feeding frenzy by around 70 tiger sharks on a dead whale, turning the pristine waters of the aptly named Shark Bay in Australia red.

Two boatloads of tourists were on a cruise to Dirk Hartog Island in Western Australia when they came across the gruesome spectacle on Friday.

Geraldton-based Eco Abrolhos Cruises sent up a drone to record nature taking its course. The footage showed the sharks ripping the giant humpback whale carcass to shreds, leaving a trail of crimson water.

"Something to show and tell the grandchildren," the company said on its Facebook page after posting the footage, which had been viewed nearly half-a-million times by Monday.

Passenger Leesa Franks said on the social media site: "We liked, liked, liked. Awesome day yesterday, thanks so much."

Shark Bay is a World Heritage-listed area some 800 kilometres north of Perth. It is known for its large marine animals including whales, sharks, dolphins, dugongs and turtles.