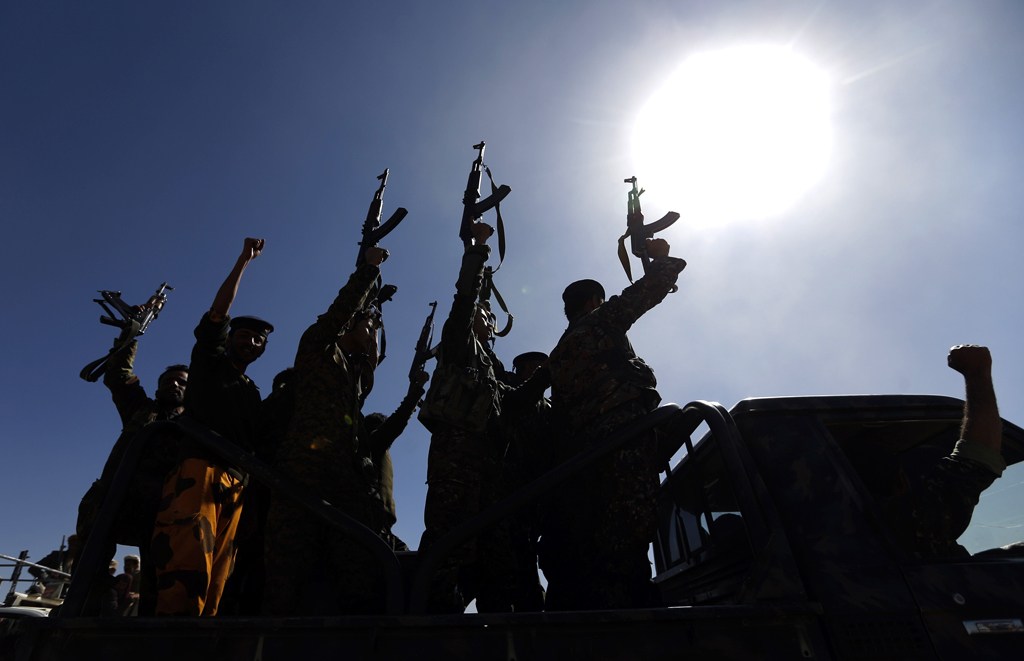 Newly recruited Houthi fighters chant slogans as they ride a military vehicle during a gathering in the capital Sanaa to mobilize more fighters to battlefronts to fight pro-government forces in several Yemeni cities, on January 3, 2017.

SANAA - Yemen&39;s exiled president ordered troops to advance on Sanaa hours after his predecessor was killed by Huthi rebels, officials said, as heavy fighting continued in the capital.

President Abedrabbo Mansour Hadi called on Yemenis to unite against the Iran-backed insurgents who shot Ali Abdullah Saleh dead as he fled the city following the collapse of their alliance.

"Let&39;s join hands to end the control of these... criminal gangs and... open a new chapter to rid our beloved Yemen of this nightmare," Hadi, leader of the internationally recognised government, said in a televised address late Monday from Saudi Arabia, where he lives in exile.

Saleh, who ruled Yemen for three decades, had joined forces with the Shiite Huthi rebels in 2014 when they took control of large parts of the country, including the capital, Sanaa.

But that alliance unravelled over the past week, with dozens reported dead in heavy clashes as the former leader reached out to the Saudi-led coalition that has waged devastating air strikes against the Huthis since September 2015.

Yemen&39;s war has left thousands dead, led to one of the world&39;s worst humanitarian crises and deepened tensions between Middle East rivals Saudi Arabia and Iran.

Military and government sources said the army would advance on Sanaa from the east and northeast, with at least seven battalions ordered to move forward.

Saleh was forced to step down in 2012 after his forces waged a bloody crackdown on peaceful Arab Spring-inspired protests calling for his ouster.

The 75-year-old had survived a civil war, rebellion in the north, an Al-Qaeda insurgency in the south and a June 2011 bomb attack on his palace that wounded him badly.

The Huthis announced Saleh&39;s death on the rebels&39; Al-Masirah television station, declaring in a statement the "end of the crisis of militias" -- referring to Saleh&39;s armed supporters, to whom the government have offered an amnesty.

There were reports of further clashes and coalition strikes against Huthi-controlled government buildings and around Sanaa airport on Monday evening.

The Saudi-led coalition warned the city&39;s residents to evacuate rebel-controlled areas, as international aid groups warned Monday they were losing the ability to reach civilians in Sanaa.

A video provided to AFP by the rebels showed what appeared to be a dead Saleh with a severe head injury, his body wrapped in a floral-print blanket.

A military source said the Huthis had stopped their four-car convoy about 40 kilometres south of Sanaa and shot dead Saleh and two other officials.

Faiqa al-Sayyid, a leader in Saleh&39;s General People&39;s Congress (GPC) party, said Saleh "was martyred in the defence of the republic".

The Saleh-Huthi alliance had been fraught since its inception in 2014 when the two ended decades of enmity and joined ranks to capture Sanaa from Hadi&39;s government.

Saudi Arabia, accusing Iran of backing the rebels, intervened in Yemen on behalf of the government the following year. The ensuing conflict has claimed more than 8,750 lives.

Saleh on Saturday announced he was open to talks with Saudi Arabia and its allies on condition they ended their crippling blockade of Yemen&39;s ports and airports -- dealing a serious blow to his already fragile alliance with rebel chief Abdul Malik al-Huthi.

In a televised speech on Monday, Huthi made no mention of Saleh&39;s death but expressed his satisfaction at the day&39;s events.

"Today marked the failure of the conspiracy and treason, a black day for the forces of aggression," he said on Al-Masirah