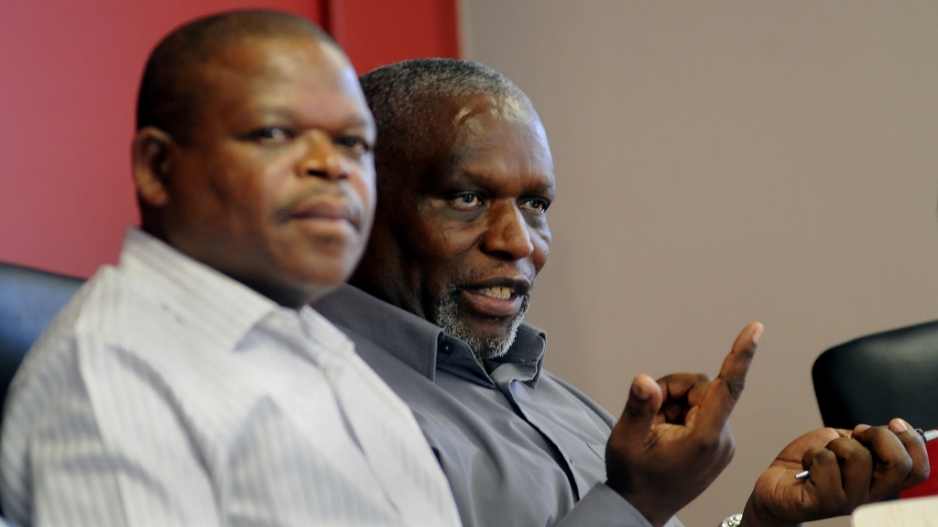 Frans Baleni, general secretary of the National Union of Mineworkers and Senzeni Zokwana, former president of NUM at a briefing on its NEC meeting, Johannesburg, 14 Novmber 2011.

JOHANNESBURG - Government has not moved away from its policy of expropriation of land without compensation, Agriculture Minister Senzeni Zokwana, said on Wednesday.

Farmers who are concerned about the effect of land reforms on their farms should realise that policy proposals presently on the table "are just to get the sector talking about the issue," he said in Caledon, Western Cape, at a launch event for next month&39;s Agri Megaweek expo.

Rural Development and Land Reform Minister Gugile Nkwinti&39;s policy paper on land reform and restitution, finalised in February this year, has been met with alarm among some farmers.

The document proposes that farm labourers assume ownership of half the land on which they are employed. This would be proportional to their contribution to the development of the land, based on the number of years they had worked on the land.

"I have spoken my colleague Mr Gugile Nkwinti... and he has assured me that at this stage it is just a proposal," Zokwana said.

"Farmers who are worried about it must realise that we do not want a land situation similar to that of Zimbabwe. Those people who are talking about land reform without compensation are not talking from the point of view of the ANC government."

He said land reform was a pressing issue that should be addressed.

"The proposal is meant to bring all farmers centrally into discussion around the table. It is not a formal conclusion on the matter."

Agri Megaweek, held annually in Bredasdorp in the Overberg region of the Western Cape is considered the largest agricultural show in the province.

The theme of this year&39;s show was "focus on Africa".

Zokwana welcomed the theme, as the Maputo Declaration on Agriculture and Food Security in Africa called for African governments to commit 10 percent of their annual budgets to the agriculture sector.

The government has called for the creation of one million jobs in the agricultural sector which could be achieved with a 10 percent allocation from the national budget.

Zokwana announced that he would be visiting India in two weeks&39; time.

India plays a central role along with Brazil, Russia, China and South Africa in the Brics partnership.

"I urge farmers to consider how the Brics regional bank can be of any use to them," Zokwana said.

"Government is opening up spaces and farmers need to think about how they will fill these spaces."