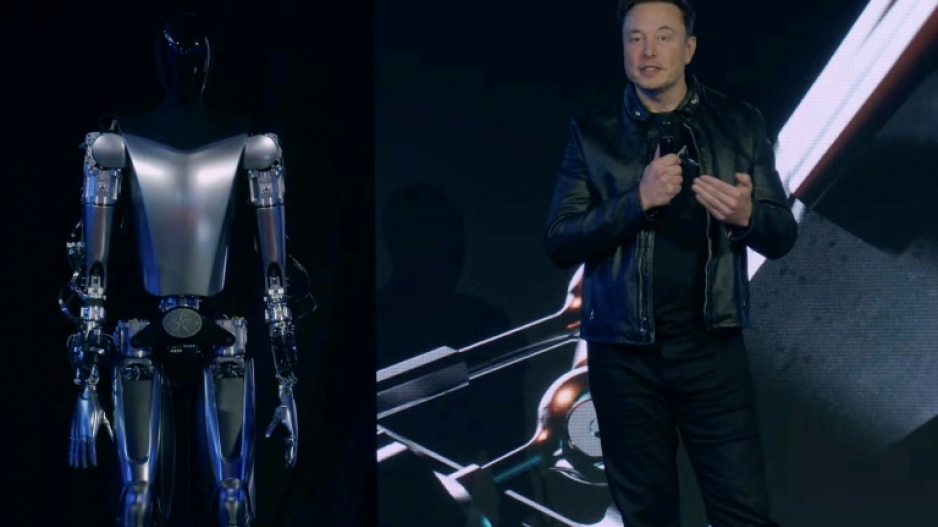 Elon Musk says an Optimus humanoid robot that Tesla is developing could be priced at less than $20,000 and wind up doing most of the work while people reap the benefits. Tesla/AFP

SA FRANCISCO - Elon Musk showed off the latest version of a humanoid robot that the world's richest man said could one day eliminate poverty.

An Optimus prototype wheeled on stage during an annual Tesla AI Day presentation was mounted to a small platform. The robot, which remains a work-in-progress, waved to the audience and raised its knees.

"Our goal is to make a useful humanoid robot as quick as possible," the billionaire tech pioneer Musk told the audience at the event in Silicon Valley.

"There is still a lot of work to be done."

Tesla is adapting its autonomous car technology to give Optimus capabilities such as walking safely or working on a factory floor, company engineers said during the presentation.

Another version of the robot, built with off-the-shelf components rather than Tesla-made parts like Optimus, walked slowly onto the stage, pumped its fists and thrust its hips briefly in time with music as if dancing.

"The robot can actually do a lot more than we just showed you, we just didn't want it to fall on its face," Musk quipped.

Tesla is designing Optimus robots to be produced at high rates, pushing the price perhaps lower than $20,000, Musk said.

"This means a future of abundance; a future where there is no poverty, a future where you can have what you want in terms of products and services," Musk said.

"It really is a fundamental transformation of civilization as we know it," he said.

Musk, who once warned of artificial intelligence being a threat to humanity, said that Tesla wants to make sure the transition to a society in which robots do the work and people reap the benefits is a safe one.

"We always want to be careful we don't go down the Terminator path," he cautioned, referring to a blockbuster film about a killer cyborg and noting that Tesla is building in safeguards including a stop button that can't be tampered with.

He said Tesla will begin testing Optimus on factory floors, doing simple tasks like carrying parts, and that the general public should be able to purchase the robots in three to five years.

Musk contended that Tesla, as a publicly traded company, would be held accountable by its shareholders if they think it isn't being socially responsible.

"It's very important that I can't just do what I want. Tesla's structure is ideal for that."