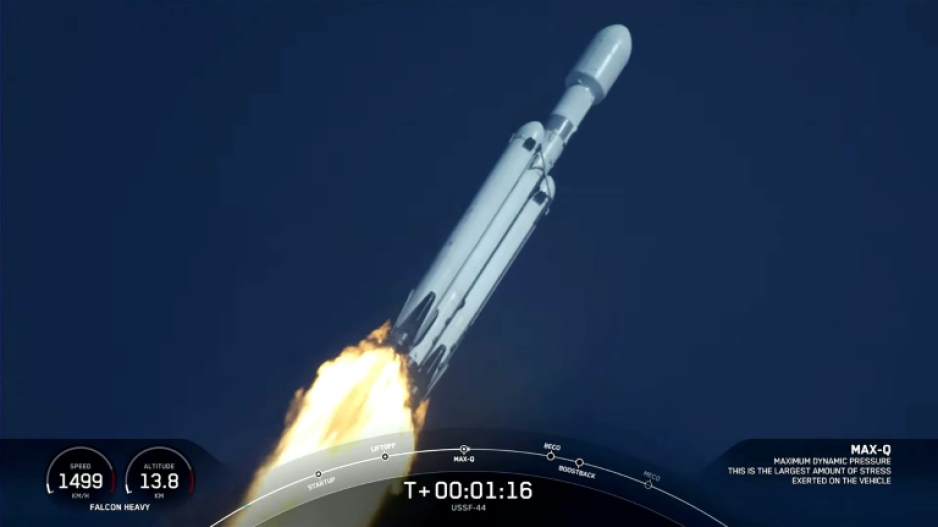 FLORIDA - SpaceX launched its Falcon Heavy rocket from Florida on Tuesday, the first flight since 2019 of the world's most powerful rocket.

Mission USSF-44, transporting cargo for the US Space Force, including the TETRA 1 satellite, blasted off from the Kennedy Space Center around 9:40am.

Several minutes later, the rocket's two side boosters made their way back to Earth -- the craft's main stage will never be recovered.

Falcon Heavy was launched for the first time as part of a test in 2018, carrying SpaceX boss' Elon Musk's own Tesla car.

The first is the Falcon 9, which is primarily used to transport NASA astronauts to the International Space Station and to launch satellites for SpaceX's Starlink internet program.

Falcon Heavy is used to launch much heavier payloads into further orbits. It is capable of carrying up to 64 tons into Earth orbit.

NASA has also chosen Falcon Heavy to fly parts of its future space station set to orbit around the Moon.

SpaceX is also developing another rocket at its base in Texas, the Starship, which consists of a spacecraft mounted on a first-stage booster called the Super Heavy, though the craft has never flown in its complete configuration.

The spaceship part of the craft has taken several suborbital test flights on its own, many of which ended in dramatic explosions.

NASA has already picked Starship to ferry its astronauts to the Moon as part of the Artemis 3 mission, set for 2025 at the earliest.

The space agency will take astronauts up to lunar orbit itself, thanks to its own heavy rocket called the SLS, which has been in development for more than a decade.

The SLS, which is expected to surpass Falcon Heavy to become the most powerful rocket in the world, has seen its first launch twice cancelled at the last minute in recent months.

The next tentatively planned launch date for the uncrewed flight is set for November 14.