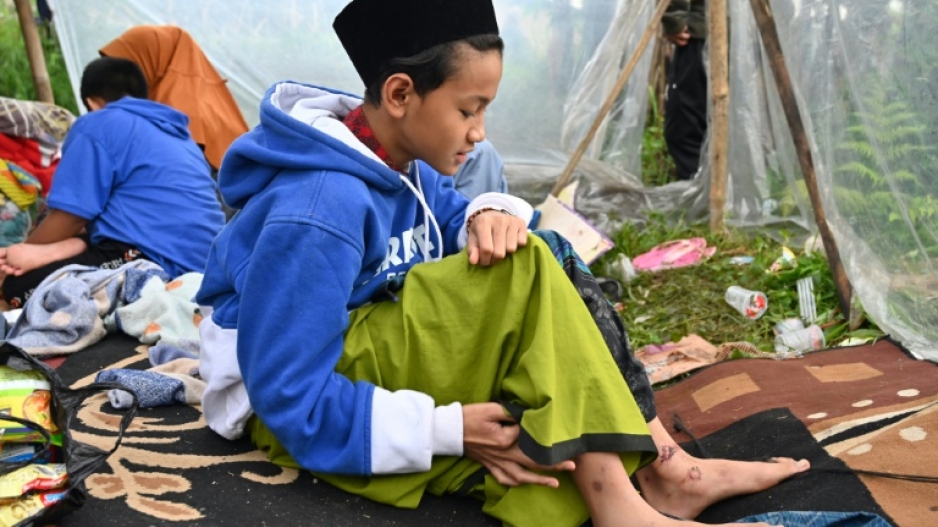 Aprizal Mulyadi lost a friend in the earthquake who had saved him from the rubble. AFP/Adek Berry

CIANJUR - Iwan Gunawan was forced to leave his gravely injured wife buried under rubble to run outside and save his daughter after a strong earthquake rocked Indonesia's largest province.

As he rushed to pull the girl from under debris, a wall fell on the fish trader leaving him unable to breathe.

"I kept chanting 'God save me'. I tried to protect my daughter and I tried to be strong," he said.

"I wanted to save my wife too, but if I insisted we all would have died."

The tremor that killed 252 people near the worst-hit town of Cianjur on Monday ripped families and friends from one another in a few seconds and forced people to make gut-wrenching decisions in the moment.

Roofs and walls caved in on locals without notice while landslides on the town's undulating hills wiped out vehicles and buried residents.

Standing in front of his destroyed home the next day, Gunawan wiped a tear from his eye as he recalled the death of his wife.

"It's all ruined," said the 41-year-old resident of Ciputri village in West Java.

Moments later two men brought his daughter on a stretcher and laid her down in front of the house next door. Gunawan rushed over to console her as she whimpered in pain.

"Dad is here now, don't cry," he told her, kissing her forehead.

Aprizal Mulyadi woke up on a normal Monday to study at his Islamic boarding school.

Hours later he was being pulled from the rubble and mourning a close friend who sacrificed his life to save him.

The 14-year-old's legs were trapped under concrete as the room collapsed around him.

Twelve-year-old Muhammad Zulfikar performed the ultimate act of friendship, pulling Mulyadi alive from the carnage. Then, as he went to help another friend, the roof fell in and buried him.

"I could not help him because my legs and back were injured. When he was trapped, he told me to go and save myself," he said, sitting on a tarpaulin behind the damaged school.

"I am still traumatised, I could not sleep because I kept thinking about what happened," he added, grabbing his ankle, which was still swollen and bleeding from the crush of debris.

The rescue mission carried on into Tuesday to find those trapped by the disaster while residents tried to retrieve their pets and belongings.

Indonesian President Joko Widodo visited the area and offered some compensation for those whose homes were destroyed.

Others offered prayers at funerals and burials around the town, choking back tears.

For some, none of that seemed to matter in comparison with the trauma.

Gunawan began to sob as he remembered the day before the quake, when his wife was cooking local staple cassava in the kitchen for the family.

"I am devastated. My house is destroyed and I lost my wife," he said, choking on tears.