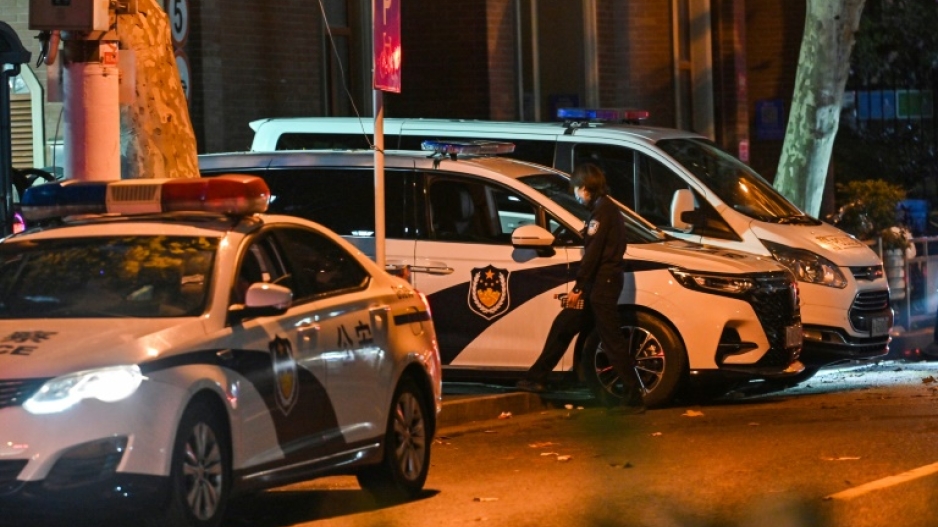 After a day of rare protests in China, police were out in force. AFP/Hector Retamal

BEIJING - Asian equities rose and the dollar weakened on Tuesday as China avoided another night of protests after a weekend of unrest across the country fuelled uncertainty in the world's number two economy.

The gains were led by a rally in Hong Kong and Shanghai, with property firms enjoying a much-needed surge on the back of moves to ease funding restrictions on troubled developers.

However, sentiment was tempered by warnings from top Federal Reserve policymakers that US interest rates would rise further and could go higher than initially thought to fight inflation.

The remarks were partly to blame for big losses of more than one percent in Wall Street's three main indexes.

China was rocked by demonstrations at the weekend calling for more political freedoms and an end to the country's long-running and economically painful zero-Covid strategy that has seen millions thrown into lockdown for months.

Several arrests were made and security forces were out in force Monday to prevent a repeat of the protests, which were the most widespread since pro-democracy demonstrations were crushed in 1989.

The return of some calm helped Hong Kong stocks rally more than three percent and Shanghai more than one percent, with some commentators suggesting the unrest could actually help push leaders to ease some of the strict containment measures.

Property firms were among the best performers after China said it would end a ban on firms raising cash by selling stocks, marking the latest measure to ease pressure on the sector, which has seen several companies collapse and threatens the wider economy.

Attention is turning to the United States this week with a number of Fed officials due to speak, including boss Jerome Powell, while Friday sees the release of key jobs data, which could provide an idea about the bank's plans for monetary policy.

Bets on a slowdown in its pace of rate hikes have boosted markets for the past weeks, but some high-ranking members on Monday looked to play down the chances of a more dovish pivot.

St. Louis Fed chief James Bullard warned "markets are underpricing a little bit the risk that the (policy board) will have to be more aggressive rather than less aggressive in order to contain the very substantial inflation that we have in the US".

And Richmond Fed president Thomas Barkin added: "I'm very supportive of a path that is slower, probably longer and potentially higher than where we were before."

The officials indicated borrowing costs would not likely come down until the end of next year or in 2024.