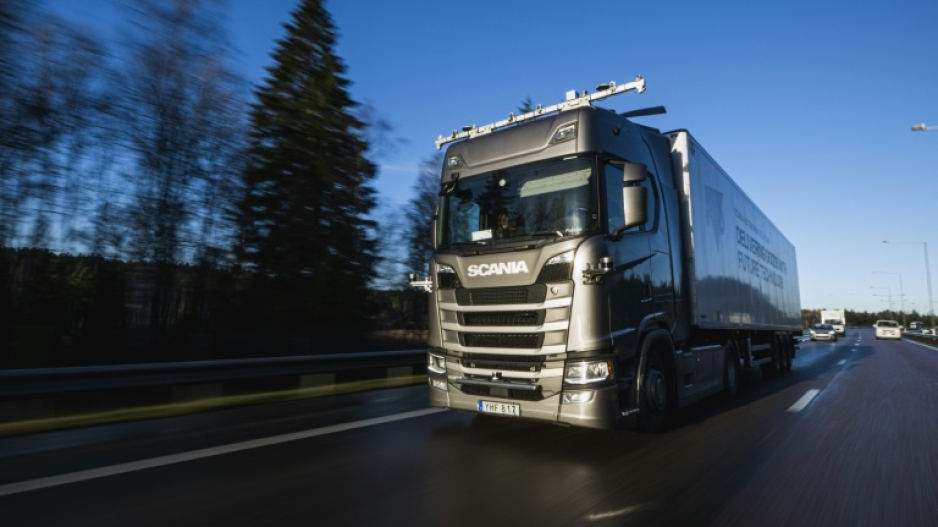 SODERTALJE - Barrelling down a motorway south of Stockholm in a 40-tonne lorry and trailer, the driver keeps a careful eye on the road but, jarringly, no hands on the wheel.

Instead, the truck drives itself, and veteran driver Roger Nordqvist is at the ready only in case of unexpected problems.

Swedish truck maker Scania is not the only auto manufacturer developing autonomous vehicles, but it recently became the first in Europe to pilot them while delivering commercial goods.

"We take their goods from point A, drive them to point B, fully autonomously," Peter Hafmar, head of autonomous solutions at Scania, tells AFP outside the company's transport lab in Sodertalje, south of Stockholm.

In the pilot project, the self-driving truck is manoeuvring a stretch of some 300 kilometres (186 miles) between Sodertalje and Jonkoping in Sweden's south, delivering fast-food goods.

From the outside, the vehicle looks almost like any other lorry, save for a rail on the roof packed with cameras and two sensors resembling bug antennae on the sides.

Inside the cab, the wheel and seats are where you'd expect to find them, but small devices and screens dot the dashboard and a nest of wires run to the computer rack housed behind the passenger seat.

Engineer Goran Fjallid sits next to the safety driver in the passenger's seat, eyes glued to his laptop as it receives video from the truck's cameras and flickering text with information about what the vehicle is seeing.

A second screen shows a 3D-visualisation of the truck on the road and all nearby vehicles.

The lorry combines all the input from the various sensors with a GPS system, with the different technologies acting as back-ups for each other.

"If the road markings disappear for a while, then it will use the GPS and it stays perfectly in its lane," Fjallid explains.

"It drives better by itself than when you drive it manually," he adds.

But he acknowledges that a lot of trial and error has gone into getting the truck to that point.

They've had to tweak things like how the truck handles merging onto the motorway, and what to do when another car cuts in front of it.

Every time the truck does something unexpected, such as braking or slowing down for no apparent reason, Fjallid makes a note of the exact timing so the logs and data can be examined.

The lorry's sensors are also calibrated daily before hitting the road.

Hafmar says there are still some hurdles to clear before driverless trucks -- without safety drivers -- become a common sight on roads, both in terms of technology and legislation.

They expect to have this ready by the end of the 2020s or the beginning of 2030s, Hafmar says.

The advent of self-driving trucks can be seen as a threat to the jobs of truck drivers -- one of the world's most common professions.

But Hafmar insists autonomous vehicles are needed to address a global driver shortage.

And, he says, it will be a long time before artificial intelligence will be able to handle all aspects of logistics.

Initially, self-driving lorries will likely be used for long-haul trips, but the last-mile distribution to shops and customers "will happen with human drivers", Hafmar adds.

According to a report from the International Road Transport Union (IRU) in June, there were some 2.6 million unfilled positions for truck drivers around the world in 2021.

Hafmar also points out other potential benefits: since computers don't need to sleep or rest, the vehicles can be scheduled for trips at times when there is less traffic, or drive slower -- but for longer -- to save on fuel.

A host of other companies are also in the race to launch self-driving trucks.

Start-ups Aurora, Waymo, Embark, Kodiak and Torc (together with Daimler) are running tests in the United States, while China's Baidu announced a self-driving truck in late 2021.

In Europe, IVECO is working with Californian start-up Plus, supported by Amazon, and recently announced the end of their first phase of circuit testing. They will also launch road tests.