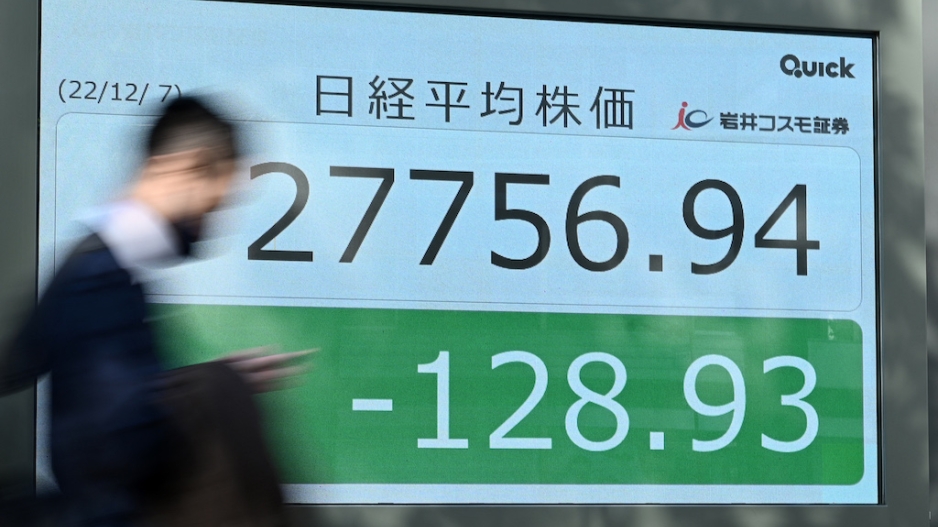 A man walks past an electronic board showing the morning numbers on the Tokyo Stock Exchange. AFP/Richard A. Brooks

LONDON - Major stock markets were hit by more selling on Wednesday on growing fears that Federal Reserve monetary tightening will tip the US economy into recession.

Drops in Asia and Europe followed steep losses on Wall Street after the heads of leading US banks warned of tough times ahead in 2023.

JPMorgan Chase chief Jamie Dimon tipped a "mild to hard recession" and Goldman Sachs' David Solomon said jobs and pay would be hit, while Morgan Stanley and Bank of America were also uneasy about the outlook.

The comments added to the downbeat mood that has coursed through trading floors at the start of the week, after forecast-beating reports on jobs and the giant US services sector fanned worries the Fed would have to push interest rates higher than hoped.

Markets had been rising healthily after a weaker-than-expected inflation reading for October suggested the almost year-long tightening campaign was finally affecting prices.

"Any hopes that the Fed would turn more dovish in the months ahead have been dashed significantly as the vast US services industry is where sticky inflation hangs out," said SPI Asset Management's Stephen Innes.

He added that the latest readings suggest rates would go above five percent before the Fed stops hiking, while several observers have suggested they will not be reduced until 2024.

"It would appear the recovery in stocks -- bear-market rally, or otherwise -- has run out of steam, and investors are left wondering whether what follows next is another test of the lows or simply a correction of that impressive two-month surge," said market analyst Craig Erlam at trading platform OANDA.

Major Asian markets ended the day down, while in Europe both Frankfurt and Paris were lower in afternoon trading, but London turned positive after Wall Street opened.

On Wall Street, the S&P 500 and Nasdaq Composite slid at the start of trading, while the Dow was flat. But they quickly pushed higher as bargain-hunters stepped in following days of selling.

The sombre outlook overshadowed China's moves to wind back some of its harsh Covid rules that traders hope will kickstart the world's number two economy, which has been battered this year by months of lockdowns and other containment measures.