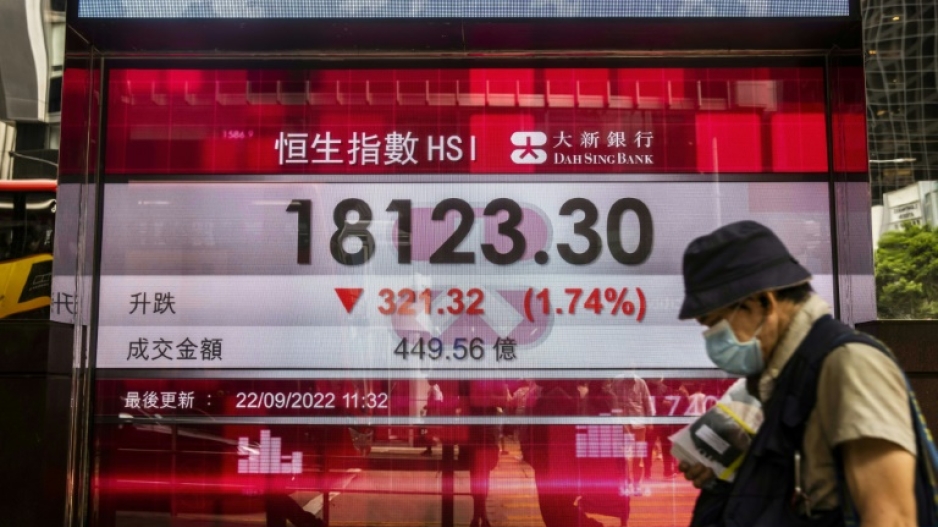 HONG KONG - Hong Kong is set to end the year in the midst of a full-blown recession, the city's finance chief warned Thursday, as spiralling interest rates join strict COVID-19 controls in hammering the economy.

"There is a very high chance for Hong Kong to record a negative GDP growth for this year," Financial Secretary Paul Chan told reporters, adding that interest rates were being raised "at a pace that was never seen in the past three decades".

The Chinese city's monetary policy moves with the Federal Reserve because its currency, one of the cornerstones of its business hub reputation, is pegged to the US dollar.

The city is currently in a technical recession -- recording two consecutive quarters of negative growth this year.

The government has adhered to a version of China's zero-Covid policy for more than 2.5 years, enforcing strict coronavirus controls and mandatory quarantine for international arrivals.

Quarantine, once as long as three weeks, has been reduced to three days. The government has signalled it may soon join the rest of the world in scrapping travel curbs.

Chan signalled his support for making travel and business easier.

"The aspects related to the pandemic need to continue to improve in order for us to see larger investments because people are more cautious in a high-interest rates environment," he said.

Business leaders have long been warning that the pandemic controls, combined with Beijing's ongoing crackdown on dissent, have made it harder to attract talent and cut off Hong Kong internationally, especially as rivals reopen.

The city has seen a net outflow of more than 200,000 people in the last two years, a record population drop.

"Hong Kong should be ahead of other Asian cities. But now there's a feeling that we're falling behind and being left isolated," Eden Woon, the new head of the city's American Chamber of Commerce told the South China Morning Post in an article published Thursday.

"There are people leaving and the problems of retaining talent. All these things add up together and need to be addressed," he added.

But earlier this week a senior Chinese official said it was "inappropriate" to say the city was seeing an exodus.

"Hong Kong's population drop is caused by various factors and there is no way to suggest that it is a result of an emigration wave," Huang Liuquan, deputy director of the Hong Kong and Macau Affairs Office, said Tuesday.

The Hang Seng Index has been one of the worst performing top bourses in the past two years, shedding more than 22 percent since the start of January following last year's 14 percent drop.

While the Hong Kong Monetary Authority has no choice but to follow the Fed, major banks such as Standard Chartered and HSBC have resisted that pressure.

But on Thursday, both HSBC and Standard Chartered hiked their prime lending rates in Hong Kong by 12.5 basis points, the first raise in years.

That could impact the city's once white-hot property sector, with Goldman Sachs Group estimating prices may slide by about 20 percent over the next four years.

Hong Kong also saw a recession in 2019 when months of huge and sometimes violent democracy protests rocked the city.