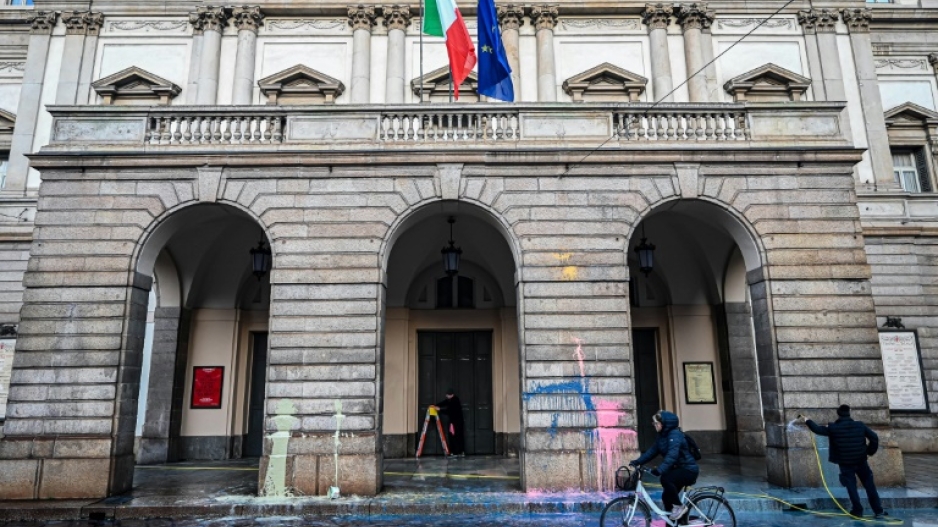 The famed La Scala opera house in Milan was to kick off the new season on Wednesday with a gala and performance of 'Boris Godunov.' AFP/Piero Cruciatti

MILAN - Environmental activists hurled paint at the entrance of Milan's prestigious La Scala opera house on Wednesday, part of a series of recent protests across Europe to focus attention on climate change.

The early morning protest came ahead of the gala opening of the new season with a scheduled performance of "Boris Godunov".

Five climate activists from the Last Generation group threw buckets of paint onto the facade of the building and inside the portico, according to an AFP photographer at the scene.

"We decided to stain La Scala with paint to ask the politicians who will attend the performance tonight to pull their heads out of the sand and intervene to save the population," wrote Last Generation in a statement.

Police quickly arrived on the scene -- where bright pink, electric blue and turquoise paint had splattered onto the sidewalk -- and the activists were detained and taken away in police cars.

A team of cleaners from La Scala then began hosing off the building and the non-permanent paint appeared to have been entirely removed.

"In order to avert the misery of its own people and safeguard people, homes and businesses, which are at risk from increasingly frequent floods and heat waves, the government must act now," it said, referring to last month's landslide caused by torrential rains on the island of Ischia that killed 12 people.

Most recently, climate activists have targeted artworks inside museums throughout Europe in protests they say are designed not to damage the works but to focus attention on environmental disasters.

They have targeted masterpieces such as the "Girl with a Pearl Earring" by Johannes Vermeer at The Hague's Mauritshuis museum, Klimt's "Death and Life" in Vienna's Leopold Museum or Van Gogh's "Sunflowers" at London's National Gallery, hurling soup or other food at the paintings behind glass.