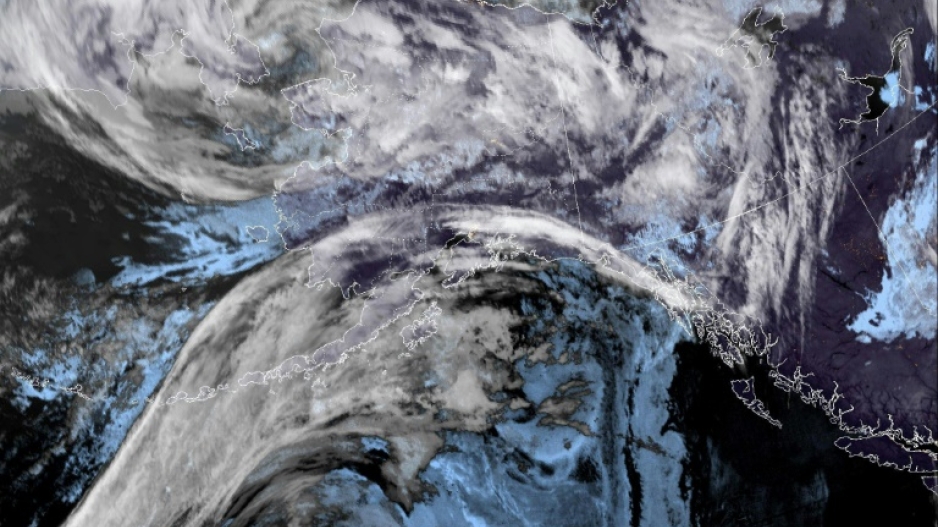 This handout satellite image from NOAA/NESDIS/STAR GOES shows a storm off the western coast of Alaska early on September 18, 2022

Residents in towns and villages on Alaska's western coast were beginning Sunday to assess the damage from one of the most powerful storms to hit the region in decades.

The vast remains of Typhoon Merbok battered coastal towns as it rumbled northward, and by Sunday morning it had largely moved into the Chukchi Sea, north of the Bering Strait.

The storm has hammered a vast stretch of Alaska's lengthy coastline, bringing powerful winds, tidal surges and what the NWS described as "angry seas," with waves of 15 meters or more.

Because of the remoteness of many coastal villages, and with communications limited, a full picture of the damage is expected to emerge slowly.

But officials and local residents said the destruction was severe.

"So many communities I have visited, from Bethel, Unalakleet, Quinahgak, Hooper Bay and up to Nome and Teller, have been inundated by the storm," Lisa Murkowski, one of Alaska's US senators, tweeted Sunday.

"I am heartsick at the devastation."

The state Emergency Operations Center said it had received "reports from multiple communities of power disruptions, damaged homes...flooding and infrastructure damage," but no reports of injuries.

Low-lying coastal areas were hardest hit, according to meteorologists and local news reports, with schools and airports flooded and some roads washed away.

One small town -- Golovin, on the Norton Sound -- saw houses float away.

"We've had flooding in the past a few times, but it was never this severe," Clarabelle Lewis, a tribal official with the Chinik Eskimo Community, told the Anchorage Daily News. "We've never had homes moved from their foundations."

In Shaktoolik, a village of some 220 people on a gravelly spit between the Tagoomenik River and Norton Sound, Mayor Lars Sookiayak said that a berm built to protect the town from the sea -- which had withstood many previous storms -- had been wiped out.