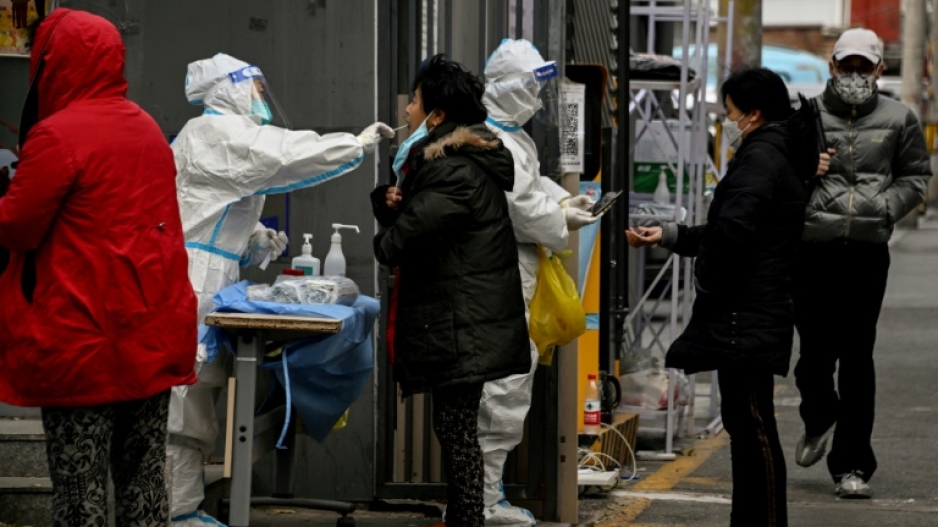 China has seen waves of protest across some of its biggest cities since the weekend, with anger over draconian Covid lockdowns feeding broader frustration over the country's political system

BEIJING - Fresh clashes have broken out between police and protesters in a southern Chinese city, part of a wave of Covid lockdown-sparked demonstrations across the country that have morphed into demands for political freedoms.

China's top security body warned late on Tuesday night that authorities would "crackdown" on the protests, which are the most widespread since pro-democracy rallies in 1989 that were crushed with deadly force.

The protests erupted over the weekend across major cities, including Beijing and Shanghai, with China's vast security apparatus moving swiftly to smother any further unrest.

But new clashes broke out in China's southern city of Guangzhou on Tuesday night and into Wednesday, according to witnesses and social media footage verified by AFP.

Security personnel in hazmat suits formed ranks shoulder-to-shoulder, taking cover under see-through riot shields, to make their way down a street in the southern city's Haizhu district as glass smashed around them, videos posted on social media showed.

In the footage people could be heard screaming and shouting, as orange and blue barricades were pictured strewn across the ground.

People are seen throwing objects at the police, and later nearly a dozen men are filmed being taken away with their hands bound with cable ties.

A Guangzhou resident surnamed Chen told AFP on Wednesday that he witnessed around 100 police officers converge on Houjiao village in Haizhu district and arrest at least three men on Tuesday night.

Anger over China's zero-Covid policies -- which involves lockdowns of huge numbers of people and has strangled the economy -- has been the trigger for the protests.

A deadly fire last week in Urumqi, the capital of the northwestern region of Xinjiang, was the catalyst for the outrage, with people blaming Covid curbs for trapping victims inside the burning building.

But demonstrators have also demanded much wider political reforms in communist China, with some even calling for President Xi Jinping to stand down.

Signalling its zero-tolerance approach to the protests, China's top security body called for a "crackdown" on what it described as "hostile forces".

The body --  which oversees all domestic law enforcement in China -- also agreed at its meeting that it was time to "crack down on illegal criminal acts that disrupt social order" as well as "safeguard overall social stability".

The warning came after a heavy police presence across Beijing and Shanghai on Tuesday appeared to have quelled protests in those cities.

Some rallies did go ahead elsewhere on Monday and Tuesday, however.

At Hong Kong's oldest university, over a dozen people led the crowd Tuesday in chanting slogans such as "give me liberty or give me death".

"We are not foreign forces, we are Chinese citizens. China should have different voices," one woman shouted, while another held a placard mourning victims of the Urumqi fire.

In Hangzhou, just over 170 kilometres (105 miles) southwest of Shanghai, there was heavy security and sporadic protests in the city's downtown on Monday night.

China's strict control of information and continued travel curbs have made verifying protester numbers across the vast country very challenging.

But the widespread rallies seen over the weekend are exceptionally rare in China.

The 1989 pro-democracy protests ended in bloodshed when the military moved in to Tiananmen Square in Beijing.

The latest unrest has drawn global attention, with solidarity protests springing up from Melbourne to Washington.

"Officials are borrowing the pretext of Covid, but using excessively strict lockdowns to control China's population," said one 21-year-old Chinese protester in Washington, who gave only his surname, Chen.

"They disregarded human lives and caused many to die in vain," he told AFP.

US Secretary of State Antony Blinken said Tuesday that Washington's position was "the same everywhere", and that was to "support the right of people everywhere, to peacefully protest to make known their views, their concerns, and their frustrations".

While China's leaders are committed to zero-Covid, there have been some signs that central authorities may be seeking a path out of the rigid policy.

China's National Health Commission (NHC) announced on Tuesday a renewed effort to expand low vaccination rates among the elderly -- long seen as a key obstacle to relaxing the measures.

Many fear that opening the country up while swaths of the population remain not fully immunised could overwhelm China's healthcare system and cause more than a million deaths.

China logged 37,612 domestic cases Wednesday, down from record highs over the weekend and comparatively tiny compared to caseloads in the West at the height of the pandemic.