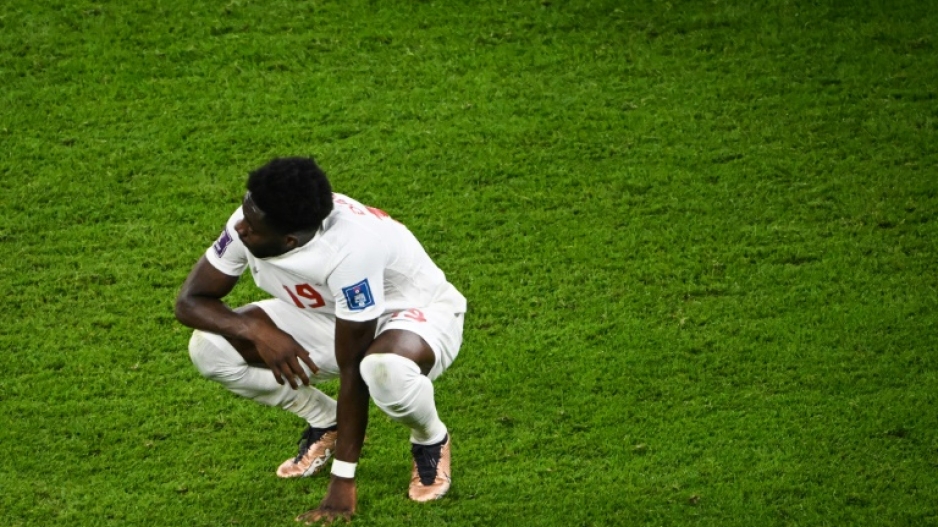 A disappointed Alphonso Davies digests Canada's 1-0 defeat to Belgium after missing a penalty that could have put his team ahead. AFP/Patrick T. Fallon

Davies squandered a golden chance to fire Canada into a shock lead over the 2018 World Cup semi-finalists in a pulsating Group F battle.

A disappointed Davies did not stop to speak to reporters after the defeat.

Herdman said the Canadian team's "brotherhood" had trusted Davies to take the kick in what was Canada's first World Cup game since 1986.

"When you've got an $85-million player with that sort of swagger, let him pick up the ball and take it," Herdman told reporters.

"It was a big moment. We were waiting to get that first goal. I'm proud of Phonzy, he's picked the ball up.

"It's a big moment, he's carrying the weight of a nation and 36 years of waiting."

The penalty miss proved costly, with Canada left ruing a series of other missed chances as Belgium escaped with a 1-0 win.

Nevertheless, English coach Herdman, the first man to coach a team at both the men's and women's World Cups, said he was proud of his side's performance.

"They showed tonight that they do belong here," Herdman said. "It's been a long time since we've been back.

"I'm sure they (the fans) walked away proud and feeling like we are football nation."

"I think this group stage is wide open now after the Croatia-Morocco result," Herdman said.

However, Herdman acknowledged that after Canada's impressive opening performance, their opponents would be better prepared.

"Teams will know us now. The cover's off, the teams will know what we do. Now we're coming up against Croatia who have a midfield three to die for," he said.

"If we can be more ruthless in attack we'll get something out of these games. The group is wide open."

Canada captain Atiba Hutchinson insisted all was not lost as his team looked ahead to their game against Croatia on Sunday.

"It's a difficult game but we showed today what we are capable of doing so we'll go in there with the same mindset again and hopefully get a better result."