Netherlands 'improving every game' at World Cup after seeing off USA 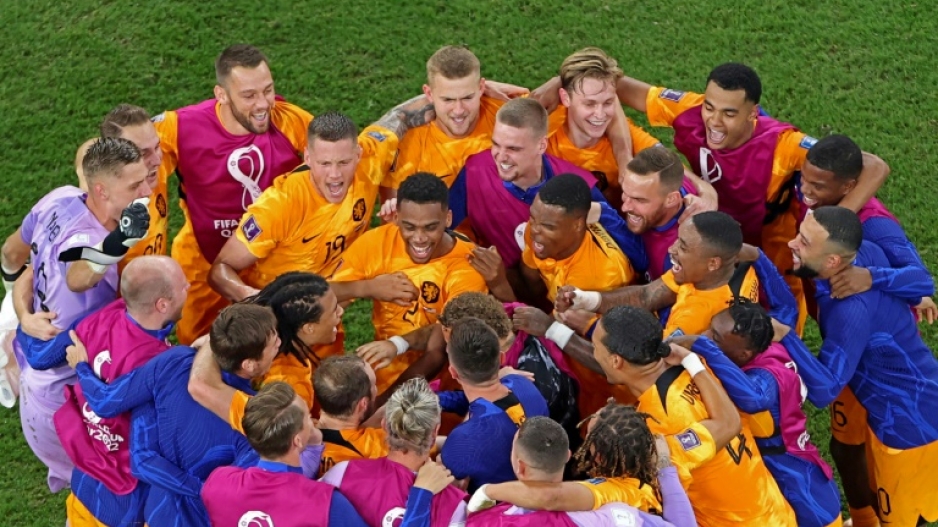 The Netherlands have reached the quarter-finals on their return to the tournament after missing out in 2018. AFP/Giuseppe Cacace

DOHA - The Netherlands are growing in confidence at the World Cup and getting better with every game, star forward Cody Gakpo said after they put some underwhelming group-stage performances behind them to beat the United States and ease into the quarter-finals.

The Dutch secured a last-eight spot with a 3-1 victory which was set up by a wonderful opening goal, finished by Memphis Depay after a 20-pass move.

"We're growing in the tournament, we're improving every game and this was another step," said Gakpo, who has been strongly linked with a move to the Premier League after the tournament.

"We have a great team spirit, we really fought for each other today, together. The spirit is really good.

"We came here with one goal and that's to become world champions and we have to win every game and that's what we're trying to do."

Prior to facing the Americans they had come in for criticism for their group-stage displays after needing two late goals to beat Senegal before a fortunate draw with Ecuador and a laboured 2-0 win over hosts Qatar.

"But we got the points and we qualified first.

"But we knew we had to play better and today we showed much more what we can do in different phases.

"In some situations we had to defend a little bit more but we know that we're very dangerous on the counter-attack.

"We haven't shown that too much in the first few games but today we showed that."

Louis van Gaal's men will face either Lionel Messi's Argentina or Australia in the quarter-finals on Friday as they continue their bid for a maiden World Cup title.

"That's what you play for all the time, to play in a World Cup and in the end to win the World Cup," said midfielder Davy Klaassen.

"We're getting closer and closer and we have to be better and better.

"Today we could've played our plan better but I think it also shows that we're really hard to beat as a team."

The Dutch, who failed to qualify for the 2018 tournament, have never lifted the trophy despite reaching the final three times -- most recently when they lost 1-0 to Spain in 2010.

But the team are hoping to fly under the radar in Qatar.

"A few top countries are no longer here and we have three more games to go," coach Van Gaal said.

"I've been saying this for a year: we can become world champions -- not that we will -- but we can."

The Netherlands have only conceded two goals in the tournament so far but could be facing Messi and a star-studded Argentina side for a semi-final spot.

It would be a rematch of the last-four clash between the two in 2014, which the Argentinians won on penalties following a goalless draw.